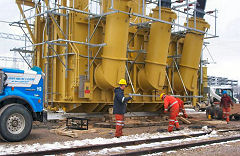 The work began with jacking the new transformer about one foot and installing our hydraulic slide system.  This consists of two 10- inch tall beams made of T1 steel with 2-inch holes every 2 feet.  These beams are spread about 12 ft apart and are supported by timber mats and blocking continuously.  On top of the slide beams we installed our formed slide shoes, which have ½ Teflon attached to the underside of the shoe.  Two 5 inch by 4 & ½ foot hydraulic rams are pinned to the shoes on top of each beam. The other end of the rams is then pinned to the holes in the slide beams.  The pump on the truck supplies the hydraulic power.

The transformer was pushed from the pad to the street and then the unit had to be lifted and the slide system removed and installed the direction of the road. After this was accomplished the transformed was pushed to just north of the old transformer.

The next step was to jack the old transformer, which was accomplished very easily.  We then tried a new method to us to move the load on 100-ton rollers and a track system.  We pulled the transformer with two winch trucks but we found that our track system was too light for the job and the rollers dug into the tracks if they were out of level a slight amount.   This was very frustrating but we persevered and got it out of the way of the new transformer coming in. 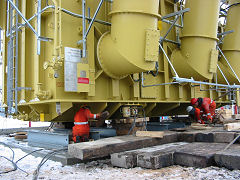 The last step of the project was to move the old transformer to an existing pad 700 ft back to the north.  This was first accomplished by the roller system, but we experienced too many problems with the rollers and finally removed them and installed the slide system.

This project was 750 miles north of where we live at the end of the most northerly road in Manitoba, and winter had already started to set in by the end of October.  We were gone a total of ten days including travel time which we felt was pretty good for the limited amount of experience we have in this line of work.