Our company undertakes the moving of bridge girders, high voltage electrical transformers and equipment of any size or weight. There is a growing demand for such services with the Manitoba Hydro development projects proposed in Northern Manitoba over the next 10 years.

Our company undertakes the moving and installation of bridge girders and components for all sizes and shapes of bridges anywhere in Canada and the USA. We have tackled the largest girders produced in Manitoba and have installed them with the use of our own equipment. Minty’s Moving developed a procedure to install large concrete girders without the use of any cranes and has revolutionized  this industry in this area.

Another form of heavy hauling we do is the offloading of high voltage electrical transformers from railcars, and then transport them to the operating sites. This work is completed without the use of any cranes, and is completed with our proven hydraulic jack and slide method. For the super heavy weights the transformers are hydraulically pushed for its entire route. This ensures a very smooth ride for the 420 ton transformers that are fully assembled and full of oil. These loads cost about 8 million dollars and it takes approximately two years to build and deliver. The smaller transformers are loaded onto our transporters and are moved great distances. 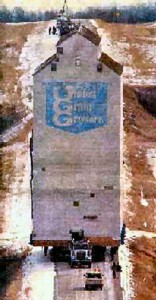 Other heavy haul projects we have completed are the giants of the prairie skies, these being the Canadian grain elevators. The largest in size that we have moved is the Lipton Elevator moved 25 miles, weighting 620-tons with all the transport equipment installed. This building was 33ft wide and 90ft long and 101ft tall loaded, and had 142 wheels transporting it. We just completed another elevator move in La Riviere, Manitoba and it was 38ft wide by 39ft long and a whopping 160ft tall. The weight of this one was 323-tons and was transported on 98 wheels.

One heavy-haul project we completed was the moving of a dinner cruise boat (The Martese) from Kelowna, British Columbia to Clear Lake, Manitoba. The vessel measured 22ft wide by 64ft long and 22ft tall, weighting 70,000 lbs. The tricky part of this move was to get it through the mountains without cutting it into many small pieces.  We accomplished this by removing the top level off the boat and transporting it on another truck.  This got our height down to 14 ft 2 inches in height, which enabled us to get under the overpasses on the interstate highways. We had to permit it through Washington, Idaho, Montana and back into Canada through Alberta and then back home.   Our total transport distance was 2,600 km.